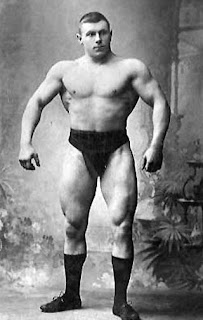 No, Hack didn’t attend the RKC. However, the principals of the RKC School of Strength have deep roots.

In “The Way To Live” Hack describes the proper execution of the one-arm Barbell Jerk:

“Exercise 7. Jerk a bar-bell …… from the shoulder, erect above the head, with one arm.

The elbow should rest firmly against the hip, thus transferring the whole weight of the bar-bell to the legs, principally to the one leg.

Quickly bend the knees, and, at the same time, “throw” the weight upwards, while with the same quick movement you stretch the arm. You will find that the principal impetus of strength will be given by the legs.

The movements have to be made very quickly. This particular exercise requires a certain technique. It greatly furthers the preservation a perfect nimbleness and equilibrium, and develops at the same time the muscles of the legs, forearm, and triceps. The exercise should be performed with both the right and left arm, at first five times, every second week increasing by one up to ten times, then increase weight by 5 lb. and start afresh. “

Hack is decribing what we call the “2nd dip” in the RKC. Many Hardstyle kettlebell lifters do this so forcefully it is expressed as a stomp.

We emphasize the 2nd dip in the RKC for 2 reasons:

The Hardstyle Jerk builds explosive power that transfers to punches, kicks, hitting, throwing….just about anything athletic. It also allows you to put a kettlebell overhead that is too heavy for you to press, developing static strength in the lockout.