“Honor and glory are boons which cannot be granted by the pen, but must be earned by the spear”- Aristodemos, Gates of Fire

One of my favorite quotes ever came in the middle of an especially delightful section of training at the April 2007 RKC. RKC Team Leader Will Williams said, “So you wanna be an RKC?? I hope you see now that it’s more than just a snatch test for reps!”

So true. The right to be called RKC must be earned.

Those of us who teach at that course take it very seriously. It is more than a snatch test, definately more than paying some money and showing up.

It is also much more than a piece of paper.

A few days ago this appeared on ebay: 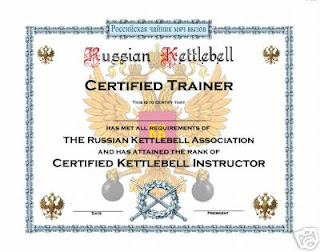 Not RKC. Not Dragondoor or Pavel.

So, for $39.99, you too can have an Instructor Certificate from the Russian Kettlebell Association, whatever that is.

I googled it and there ain’t such a thing.

Just for the record, a legitimate RKC Instructor Certificate looks nothing like that, despite the almost-copyright-infringment -but-not-quite picture of the double headed eagle.

From the same seller you can also get a Martial Arts Weapon Master – Ninja- Black Belt certificate. I am not making this up. I wish I was.

The RKC is a School of Strength and a School of Thought. It is a Brotherhood (and Sisterhood) of Iron. We strive to be the gold standard of instruction, integrity and professionalism.

You can’t buy that on eBay.